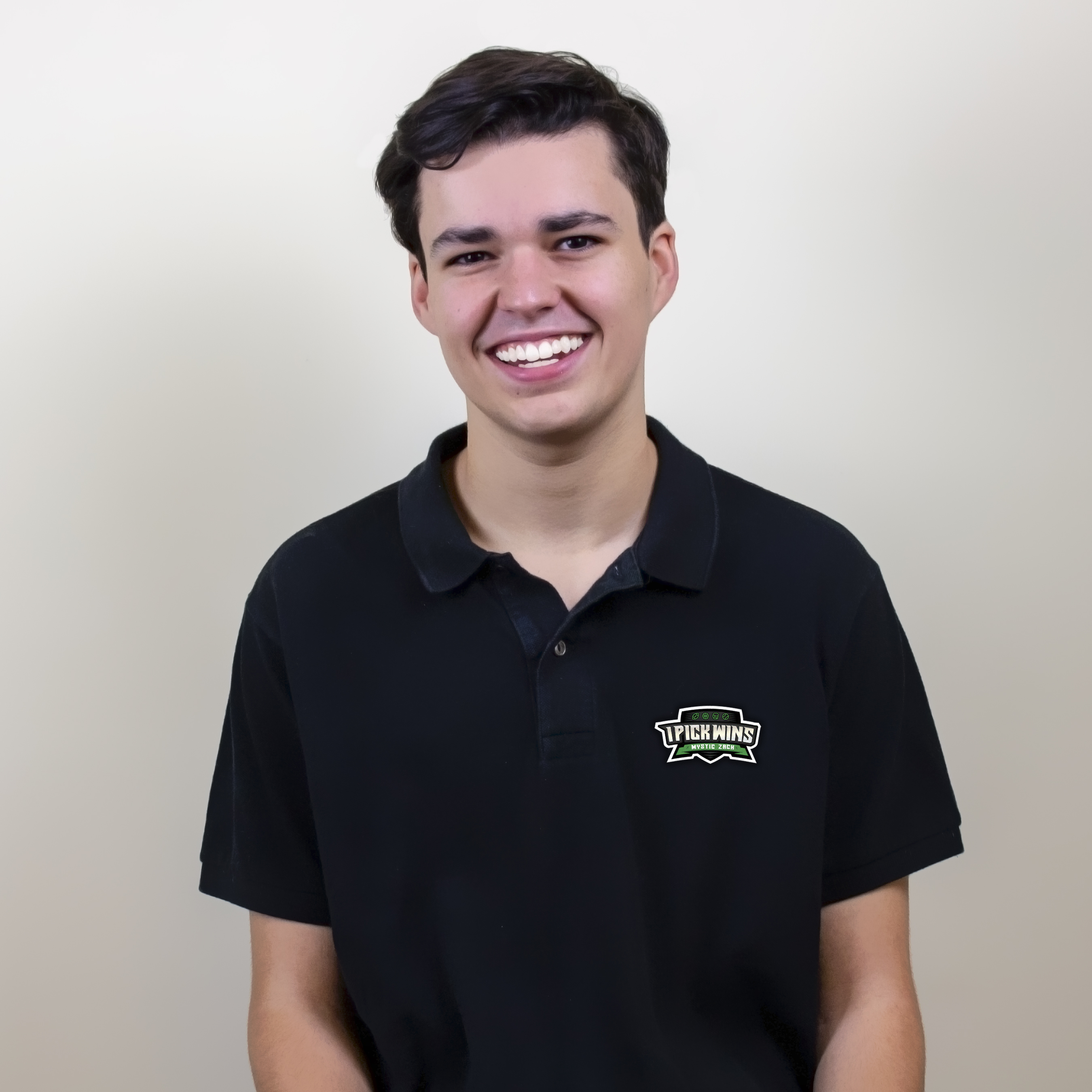 Master your craft, and never stop educating yourself about it.

At only seventeen Zach Hirsch founded his own sports handicapping and analytics company iPickwins. Known by his online alias “Mystic Zach,” he has risen to fame as one of the best sports handicappers in the world. If you’re not familiar with what a sports handicapper does, it’s simple: these individuals spend time analyzing trends in several different types of sports (football, basketball, boxing, MMA and tennis) and then predicts wins. He has been tracking sports scores and stats as long as he can remember. What started four years ago as a local weekly sports show cast on his school’s Facebook broadcast, it has evolved into his popular website ipickwins.com and his account @iPickwins on Instagram.

In just six months Zach has run up millions of hits to his posts and over a hundred and twenty thousand followers on his Instagram page. Including his followers are former NFL rushing leader Clinton Portis, Social Media Superstar Jake Paul, Two-Time Heavyweight Champion of the world Shannon Briggs and several other former NFL players, World Boxing Champions and top Social Influencers. It wouldn’t be an overstatement to say Mystic Zach had a perfect start to his launch of iPickwins. The young Mystic went undefeated in his first three weeks of picking NFL games, College Football, boxing, MMA and somehow even picked Rafael Nadal to win the 2019 Open at the onset of the tournament in a one hundred and twenty-eight player draw that includes Novak Djokovic and Roger Federer both more noted hard court champions. These picks caught the attention of athletes and social influencers across Instagram and soon he was invited to Los Angeles to join Shannon Briggs, Logan Paul and Jake Paul at Logan’s training camp for his fight with English internet star ‘KSI’. Zach landed in a couple of videos with the Paul brothers, which grabbed the attention of thousands on the internet and landed hundreds of thousands on the @iPickwins page on Instagram.

Following his time in Los Angeles with the famous Paul brothers, Zach went on to pick over ninety-percent of all NFL games, boxing matches, and MMA events correctly, an unheard-of stat even for those picking games straight up. Even more incredibly he picked every college game correctly this season going twenty-one for twenty-one including the picking of the tough SEC matchups, the Conference Championship Games and the College National Championship. Those that follow @iPickwins on Instagram are no longer surprised that Mystic Zach seems to predict every game right almost down to the play.

The one unpredictable thing about the page is just who’s going to end up with Zach in one of his pictures, videos, or posts. In addition to several professional boxers like Shannon Briggs and Shane Mosley, MMA stars like Suga Rashad Evans, NFL players including recently Hall of Famer Dan Marino, Social influencers Logan and Jake Paul The Gamer Ninja, Zach recently was featured with viral teenage rapper Lil Esco and a host of real OG’s including The Wolf of Wallstreet Jordan Belfort. Boxing Mega Promotor Don King and even John Gotti Jr. Zach has picked up friends, fans and followers across a wide spectrum of society. After all who doesn’t like a Mystic who picks every game right.

Former Star NFL Wide Receiver Nate Burleson, the host of Good Morning Football on NFL Network didn’t hesitate to express his opinion of the teenage sports handicapper. “This dude is killing it when it comes to the picks. This dude is really a genius. You know how they say there are not a lot of real geniuses left, Mystic Zach he is one.” YouTube star and now professional boxer Jake Paul agrees with Burleson simply stating “Zach, he’s a genius.”

Not only is Zach a prodigy sports handicapper, but he is also a humanitarian. In his free time, Zach has helped raise money, and supplies for Haiti and the countries relief efforts. He has also visited the country. built a house for a homeless family, and volunteered at a local orphanage.

Where did the idea for iPickWins come from?

I knew I wanted to do something in sports and use my gift as a handicapper to build a following. I thought iPickwins was a great way to do both.

What does your typical day look like and how do you make it productive?

I get up with barely enough time to walk the dog, shower, get dressed and drive to school. I go to school until three-thirty. I post some content most days and once or twice a week I will stop by my dad’s office to shoot a video. I stay up late, probably too late studying sports. I usually give myself about an hour of chill time. I’ll play basketball or a video game.

How do you bring ideas to life?

I don’t have a real set process. I just kind of make it happen. I am not afraid to try new things; I don’t test or rehearse anything. If I have an idea, I just go for it.

What’s one trend that excites you?

Analytics especially in football. I like the commonly used things like EPA (efficiency play average) and I like using formulas I made and nobody else uses like ATA (a coach’s ability to adjust). Andy Reid had the highest ATA in the league, Kyle Shanahan was average and to me, that was the difference in the Super Bowl.

What is one habit of yours that makes you more productive as an entrepreneur?

I have a habit of sticking to something I am really interested in until I’m the best at it. I never stop craving improvement. I won’t be satisfied until I’m the best sports analyst and handicapper ever. When I was thirteen, I used to be really into playing Madden on the iPhone., I practiced until I was the number one rated Mobile Madden Player in the world. Today, I don’t play much. I am onto bigger goals.

What advice would you give your younger self?

I would tell myself to ignore all the adults that thought my passion for sports statistics and knowledge was a waste of time. I used to be sensitive to what teachers and others said about it. Now I know I was right to be dedicated to my passion. I would tell my younger self don’t listen to the noise, follow your dream.

Tell us something that’s true that almost nobody agrees with you on.

Most people think that to bet on sports, especially football, you have to bet the point spread. That’s nonsense and the reason most people lose. Even if you could pick fifty-nine percent right you lose because you pay a ten percent vig. Very few people can pick over sixty percent against the spread. I’m one of the few who can do it consistently and even I don’t recommend it. Other people think betting against the line makes you a real sport better, no it usually makes you a real dummy. The money line is the way to go.

As an entrepreneur, what is the one thing you do over and over and recommend everyone else do?

I stick to what I am passionate about. I also never stop learning and I don’t want to sound cocky, but I pick wins and I do it over and over again. Do what you do best and totally commit to it.

What is one strategy that has helped you grow your business?

Picking Wins! Analyzing the data, keeping a clear mind free of bias, and staying consistent. There are not too many sports picking guys that are also trying to be sports personalities, and I’m versatile and able to interview and entertain my audience, and I like to have fun while also being knowledgeable. I think my personality plus my knowledge is a unique blend in the sports world. I also share my sports knowledge for free and in return, I get lots of support.

What is one failure you had as an entrepreneur, and how did you overcome it?

A big failure I experienced was the Logan Paul fight. I considered this a failure because I really went all in and did multiple videos with him. The guy Logan fought, KSI, had the most rabid fan base on social media and I got bombarded with negative comments. I overcame this by staying honest and sticking to the facts, and I didn’t let that deter me, and I didn’t let a preconceived bias and outside opinions get in my head. I arrive at every game with a clean slate and a fresh mind. You can’t let the past affect your thought process. It’s also the one loss that really hurts. It hurts because I think the referee stole the fight, but it hurts more because I really like Logan and know how much it must have hurt him.

What is one business idea that you’re willing to give away to our readers?

I am going to write an eBook teaching sports betting for beginners. I think a simple eBook is a great way to promote almost anything. I also have a great new daily fantasy sports app I am developing. It’s going to disrupt the whole fantasy sports world.

What is the best $100 you recently spent? What and why?

The bet I made on Jake Paul in his fight, 1st round KO of ‘AnEsonGib’.

What is one piece of software or a web service that helps you be productive?

I use lots of software but my favorite platform to use is PFF.com. It stands for Pro Football Focus.

What is the one book that you recommend our community should read and why?

My all-time favorite book is The Sports Gene. I really love that it’s unique but also relatable to sports fans and goes into depth about what makes the DNA of an elite athlete different from anyone else. It also explains the differences between an average athlete and a super-elite athlete and how to get to that top 0.01% of athletes in the world.

What is your favorite quote?

My favorite quote is hands down, “Let’s Go Champ” by Shannon Briggs. I love it so much that I say it to myself every morning as soon as I wake up. It’s honestly the best quote of all time.